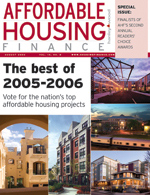 (Affordable Housing Finance, March 2005) — When developer Brad Queener chose to do his first private-placement bond deal, it was because time is money. If he hadn’t gone this route, he wouldn’t have been able to get the deal done in time. By selecting the private placement, he was joining the many other developers who have come to appreciate its attributes.

“The cost for the private placement is much cheaper” than a public bond sale, said Queener. But the speed of execution was even more important to him than the savings.

Bond transactions are usually unaffordable for small properties, so private placement may be the only way some small tax-exempt bond deals are feasible unless the bonds are pooled into one large bond transaction with other small developments. (Pooling of properties into one bond deal allows the various projects to share the fixed costs of the transaction.)

In a public sale of a bond, a financial services firm enhances the bond so it can get a much better credit rating than the developer would be able to get on its own. The bond is then ready for sale to third parties. For example, Citibank Community Development (CCD) typically provides enhancement for 17 years – the two-year construction period plus the 15-year low-income housing tax credit compliance period – noted Steve Hall, CCD’s marketplace director. But in a private-placement transaction, no enhancement is needed because the bond is not sold on the market. Instead, it is placed with a select group of investors, such as institutional buyers, or the financial services firm may opt to hold it in its own portfolio.

WHEN SPEED IS OF THE ESSENCE

The fixed fees involved in a public bond sale mean that transaction costs for a bond of less than $5 million can be prohibitive, according to experts. But Queener’s project became a candidate for private placement because of a need for a speedy transaction. Planner’s Retreat, a 192-unit multifamily development located in the town of Summerville, S.C., involved $11.9 million in tax-exempt bond financing that MMA Financial handled in a private placement. MMA also provided $4.3 million in equity for 4% tax credits. The development will serve residents with incomes at no more than 60% of the area median income.

Queener had previously done a couple of Sec. 221(d)(4) deals through the Department of Housing and Urban Development’s (HUD) Federal Housing Administration (FHA), but “we were under [a] time constraint, and we didn’t feel we could close the HUD deal in time,” he said. “We got from generation of documents to closing in 45 days.” Financing for Planner’s Retreat closed in December 2004, and construction is expected to be completed in 12 months.

Transaction costs for publicly sold tax-exempt bonds typically include taking care of bond counsel, credit enhancement or credit rating, bond issuance, underwriting, trustees, and more. For example, one West Coast lawyer noted that enhanced tax-exempt bond sales require the issuance of an official disclosure statement, which describes the risks associated with the bonds. Private-placement bond deals don’t need that statement, though they still require compliance with anti-fraud rules. As a result, there is no need for high-priced lawyers assembling the complicated disclosure document.

Planner’s Retreat’s closing involved “enough lawyers, but there wasn’t one for everybody. There were fewer parties involved” than with enhanced transactions, Queener noted.

Private placement of bonds can be arranged through many of the same financial institutions that handle bond enhancement, such as Bank of America, CharterMac, Citibank, MMA Financial and Newman & Associates. Some states have programs to assist small developers with private placements, such as the Washington State Housing Finance Commission’s streamlined tax-exempt placement, or STEP, program.

Although time was the decisive factor for Queener, cost is the other thing to consider when choosing between enhanced or private-placement bond financing. If you want to maximize the developer fee, the private placement is tempting. If your focus is cash flow, “then all other things being equal, you may tend to look toward the enhanced transaction,” said Richard Monfred, managing director at MMA Financial.

“The advantages of the private placement are ease of execution, certainty of execution, and speed of execution,” said Monfred. He said deals can be done in 75 days “from the time we first see it to when it closes.”

“Interest rate is the only thing you give up,” said Queener. Interest rates for enhanced deals can be 60 basis points lower than rates for private-placement deals. Typical private placements use fixed interest rates, but “we are starting to see some more floating-rate during construction,” said Monfred.

You can avoid debt-service reserves and operating reserves with private-placement deals, added Monfred. But if you have also sold 4% tax credits for the project, you will have to meet various requirements for your equity partners.

Elmwood Square Preservation, L.P., did not pursue a private placement for the acquisition and rehabilitation of Elmwood Square Apartments, a 138-unit high-rise building in Buffalo, N.Y. Instead, Deutsche Bank Berkshire Mortgage (DBBM) used enhanced tax-exempt bonds for public sale to fund $6.1 million in FHA Sec. 221(d)(4) construction and permanent financing. A portion of the debt for the 40-year fully amortizing loan was supported through a decoupling of interest reduction payments associated with the pre-existing Sec. 236 loan. The developer also received about $2.2 million in 4% tax credit equity, which was syndicated by Related Capital.

“They were looking to maximize debt, so the 40-year amortization, low debt-service coverage, and no loan-to-value test was very important to them,” said Cathy Pharis, DBBM vice president. “We were able to get them significantly more dollars than a private-placement scenario would have gotten them.”

PLENTY OF APPETITE FOR PRIVATE-PLACEMENT DEALS

Tax-exempt bond authority is plentiful across the country. But developers, lenders and housing finance agency executives have said that costs and deal complexity are making bond deals of all sizes harder to complete (see Affordable Housing Finance, December 2004, page 12). Despite that, lenders remain bullish on private placements.

Companies like Citibank and MMA Financial remain interested in buying the bonds for their own accounts. CCD expects to purchase $200 million in private-placement bonds this year, said Hall. MMA Financial is also active in private placement and has increased its production significantly, according to Monfred. “We have plenty of appetite for that,” said Monfred. “When we securitize that on the back end, there’s plenty of interest [from securities buyers] on that end as well.”